There’s not man outback places that can boast 500 million years of earth history as a talking point at the local hotel.

There’s even fewer where you can sit down and chat over breakfast with a world-renown professor of palaeontology.

And there’s only one place we can think of where you can dine on a ‘feral’ feast of kangaroo, emu and camel for dinner…all on the one plate. 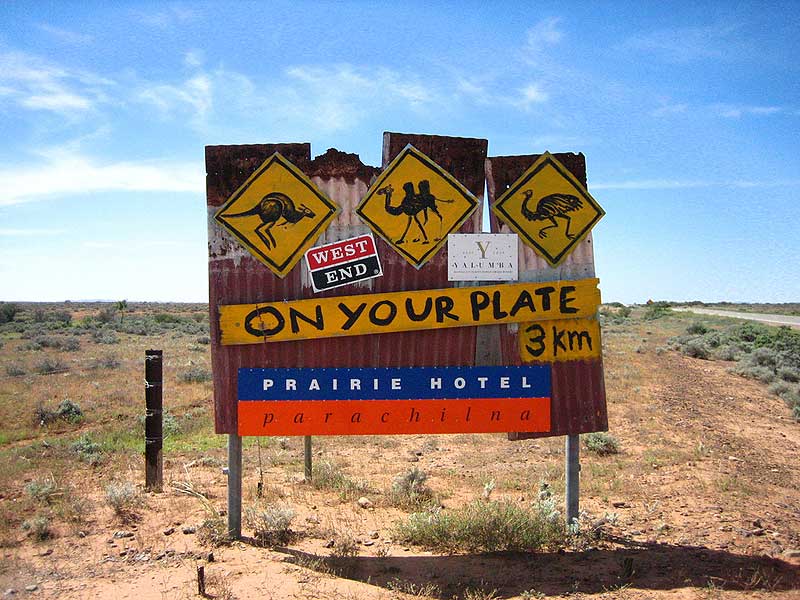 Parachilna is a blink-and-miss place tucked away just off the (road). We’re sure many people drive straight past on their way to and from the Birdsville, Oodnadatta or Strzelecki Tracks.

However, it’s a hidden gem with a few surprises and a great base to explore the northern and central Flinders Ranges from.

Why should you stay? Read on and we’ll show you why.

A Little Bit of Parachilna History

Coming from the Adnyamathanha word ‘patatjildna’, meaning peppermint gums, Parachilna township was originally surveyed in February 1863, around 10km from its current position.

The town’s original location was at a well that supplied water to the nearby copper mining settlement of Blinman.

When the Great Northern Railway was built in 1881, Parachilna was moved to its current location, becoming a maintenance station for the railway and an important siding supplying Blinman and surround areas.

However, the area around Parachilna is truly ancient.

In fact, it’s home to the fossils of some of the earliest complex marine creatures on Earth.

Just how old is it? 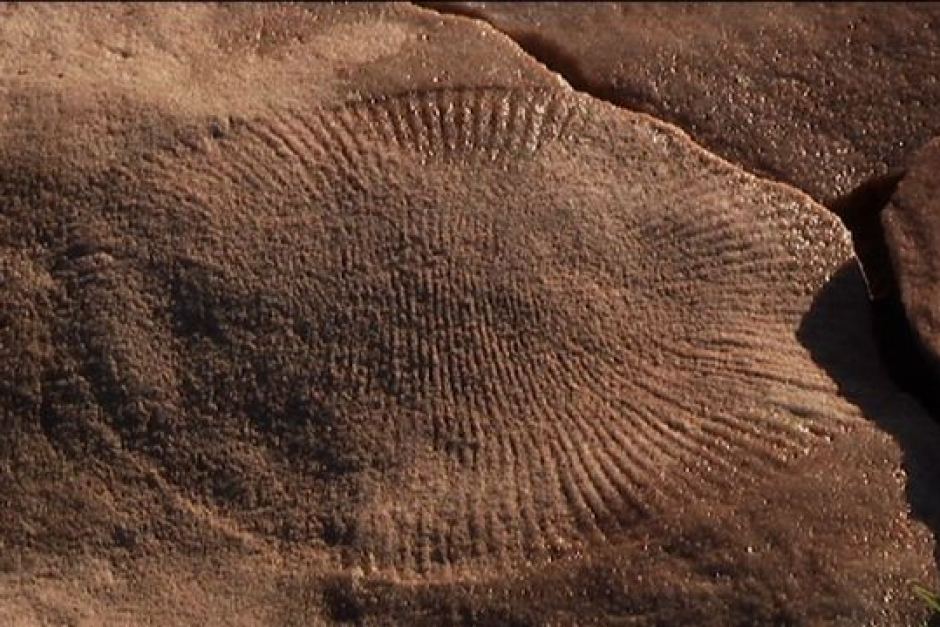 Reg Sprigg, well known geologist who’s been written about in this book by Kristin Wiedenbach, was prospecting around the old Ediacara mine in 1946 and found the fossilised remains of an entire community of complex, soft-bodied sea creatures.

This was the first discovery of such a complete fossil community, anywhere in the world.

In the mid-1980s, Ross Fargher (owner of Nilpena Station and the Prairie Hotel) discovered another deposit of similar fossils near the shearers’ quarters on Nilpena Station.

Why is this important?

The Ediacara fossils just don’t contain the remains of sea creatures, but preserve an entire ecosystem, enabling scientists to understand what life on Earth was truly like in some of its earliest forms.

Some of the fossils found in the Ediacara deposits are unlike any creature alive today.

The area around Parachilna is so remarkable and important to the history of life on Earth, that the first new geological era in 120 years, the Edicaraian Era, from 630 to 542 million years ago (that’s 88 million years), was declared in 2004.

This the first geological area named after a location in the Southern Hemisphere.

The Nilpena National Heritage Fossil Site was established on nearby Nilpena Station in 2007 to protect and acknowledge the importance of the Ediacarian fossils.

This fossil site provides an outdoor museum which draws palaeontologists and other scientists from all over the world. 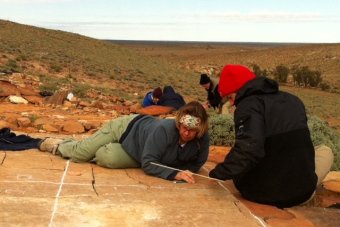 Which is how we came to be having breakfast with palaeontologist, Professor Mary Droser of the University of California (UCLA). You can read more about Mary’s work here.

Visits to the Nilpena Heritage Site can be made at certain times of the year. You can even visit when the palaeontologists are working. Read on to find out how.

Parachilna is quite small, so it doesn’t take long to walk to from one end of the town to the other no matter where you’re staying.

Here’s some of the highlights:

It’s also the place where you get your own taste of unusual outback fame and the odd feral animal served up on a special platter.

If you’ve done ANY travelling in outback South Australia at all, you’ve probably seen a few signs like this: 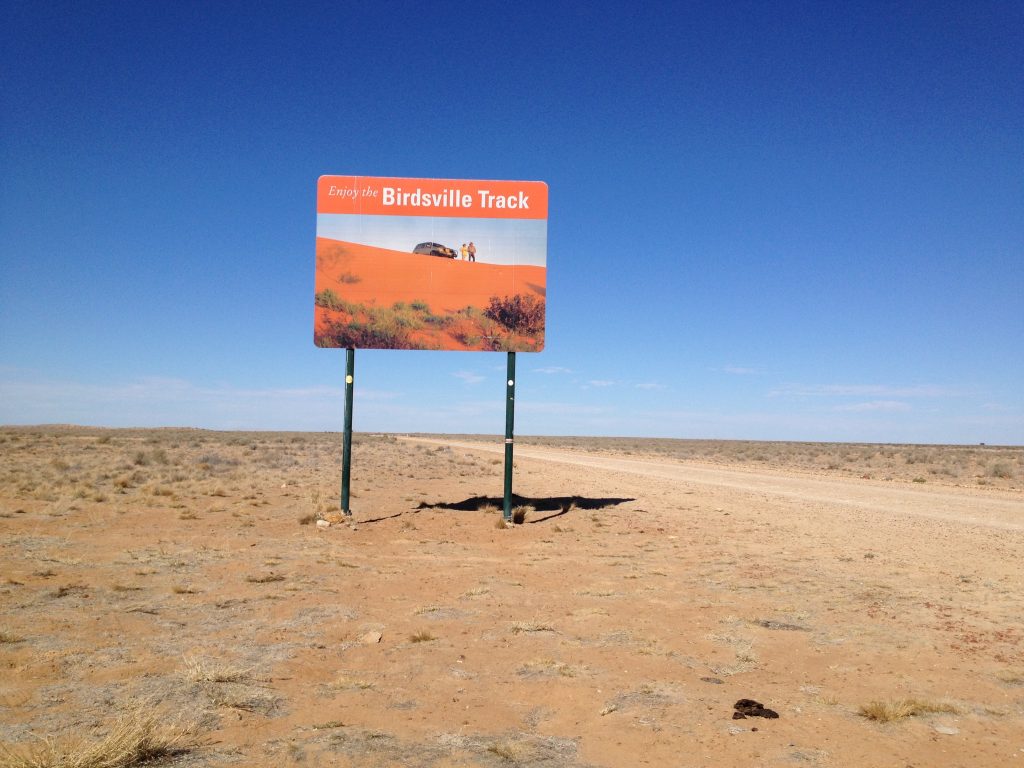 Well, that famous man standing on top of the dune is Ross Fargher who, along with wife, Jane, owns the Prairie Hotel. The Fargher family, who’ve been sheep and cattle farmers in the area for four generations, bought the hotel in 1991. 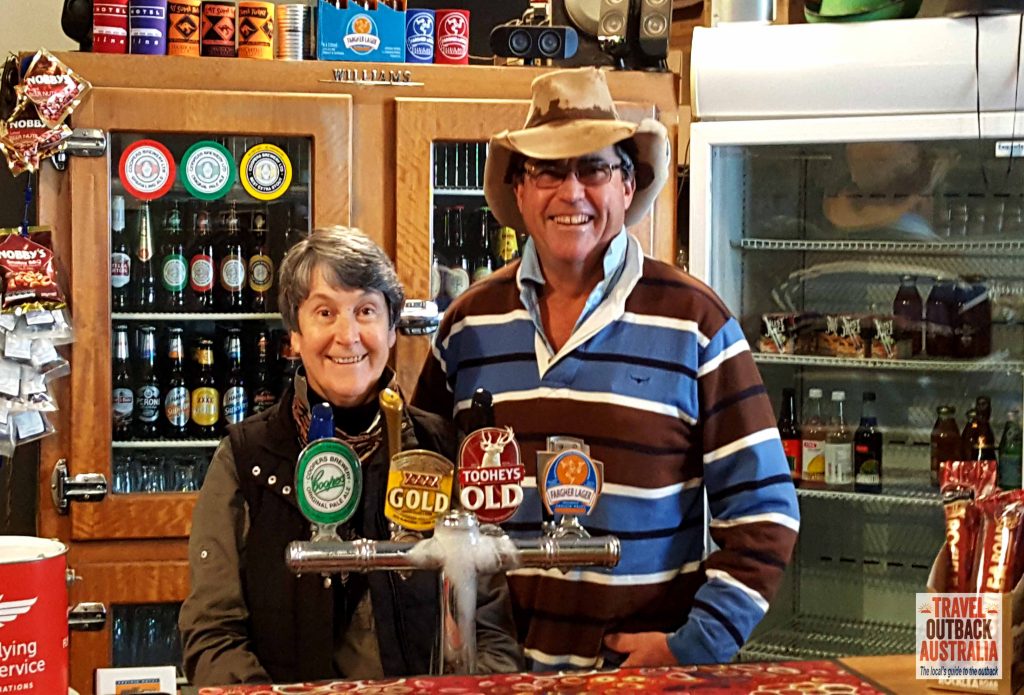 Jane & Ross Fargher, owners of the Praire Hotel. Look for the Fargher Lager on tap

The first thing we noticed about the Prairie Hotel was its uniqueness. It’s not just another outback hotel with undies, bras and business cards plastered all over the roof and walls. Not that we dislike those places – it’s just refreshing to find something different once in a while. 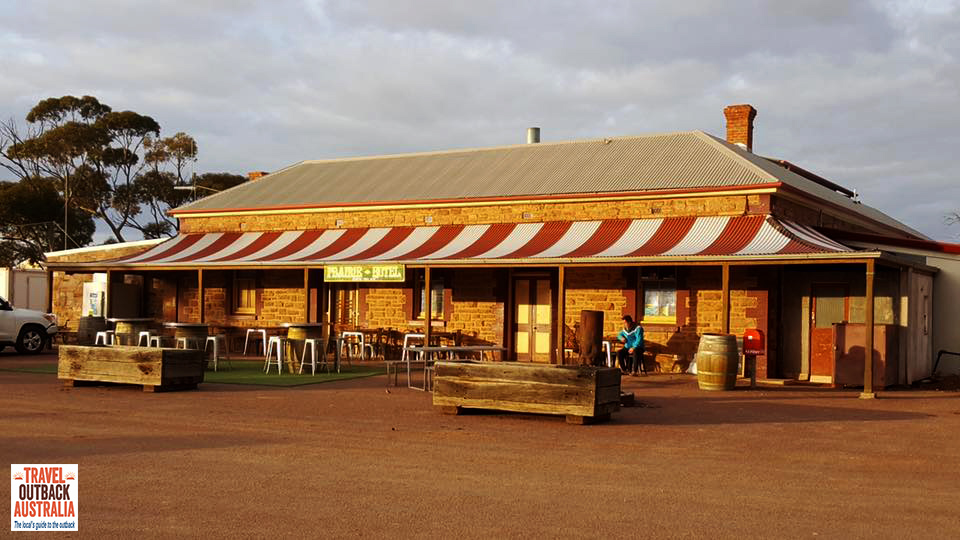 Walking into the Prairie Hotel, the first thing you’ll notice is an eclectic array of art, woodwork and local flavour – like the Fargher Ale on tap.

Whilst the all-day grazing and the barista coffee at the Prairie’s front bar is amazing, there’s one thing we really want to rave about and that’s the FMG – the Feral Mixed Grill.

The Feral Mixed Grill is kangaroo fillet, emu fillet mignon and camel sausage. Here’s what it looks like: 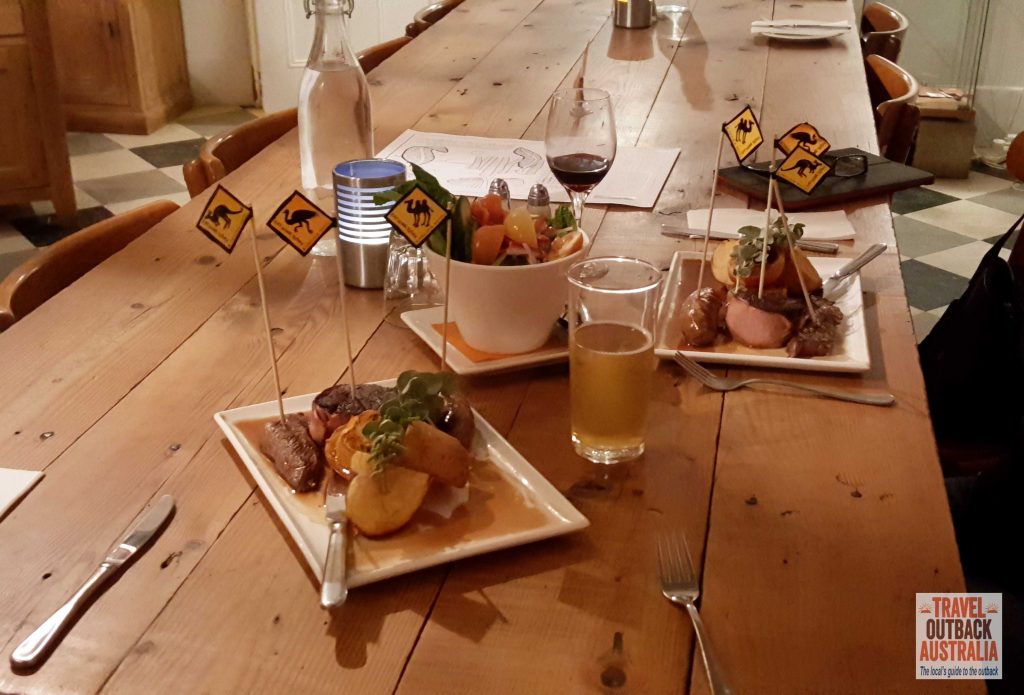 Whilst we’re big fans of camel meat, we’re really hard to impress when it comes to kangaroo.

A lot of store bought kangaroo meat is just awful compared to what’s been hunted and cooked fresh on an open fire by Aboriginal people.

We’re please to say that the Prairie Hotel’s kangaroo is as good as that any cooked by old Tjilpis (that’s Pitjantjatjara for old men).

After tasting it, we can see why people drive almost 500km for a meal! 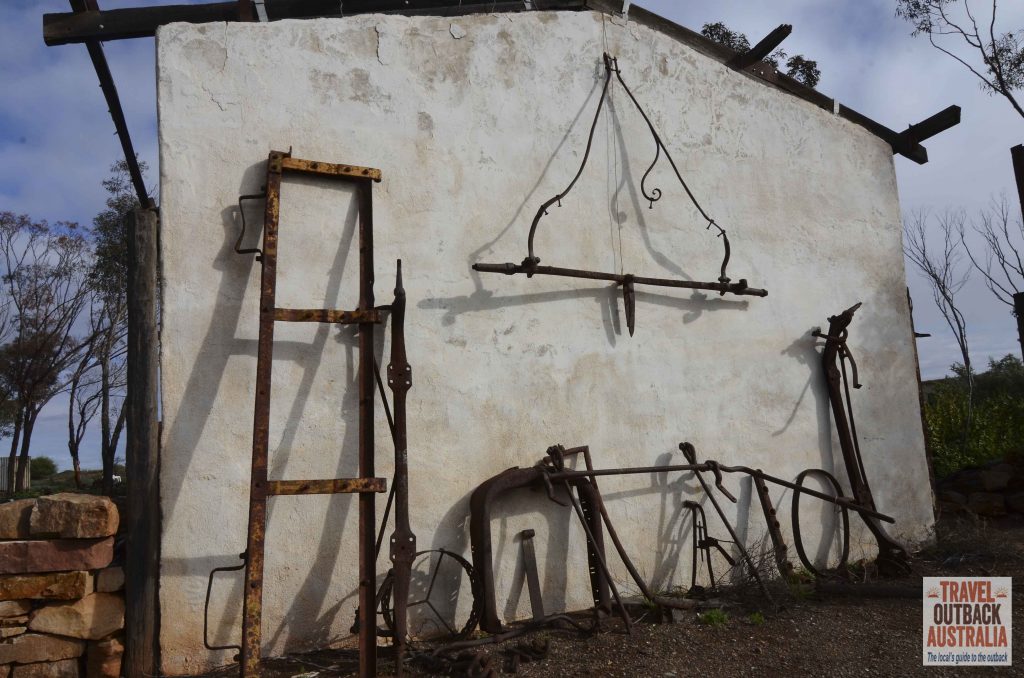 At sunset, head outside for some spectacular colours on the nearby Flinders Ranges.

Parachilna is a perfect base if you’ve got a big caravan or if you’re heading further north and want a taste of the Flinders Ranges.

Unhook your van for day trips to historic Blinman (don’t forget the pizza night on Fridays at the pub), Glass Gorge (you can read about our trip here) or Brachina Gorge. 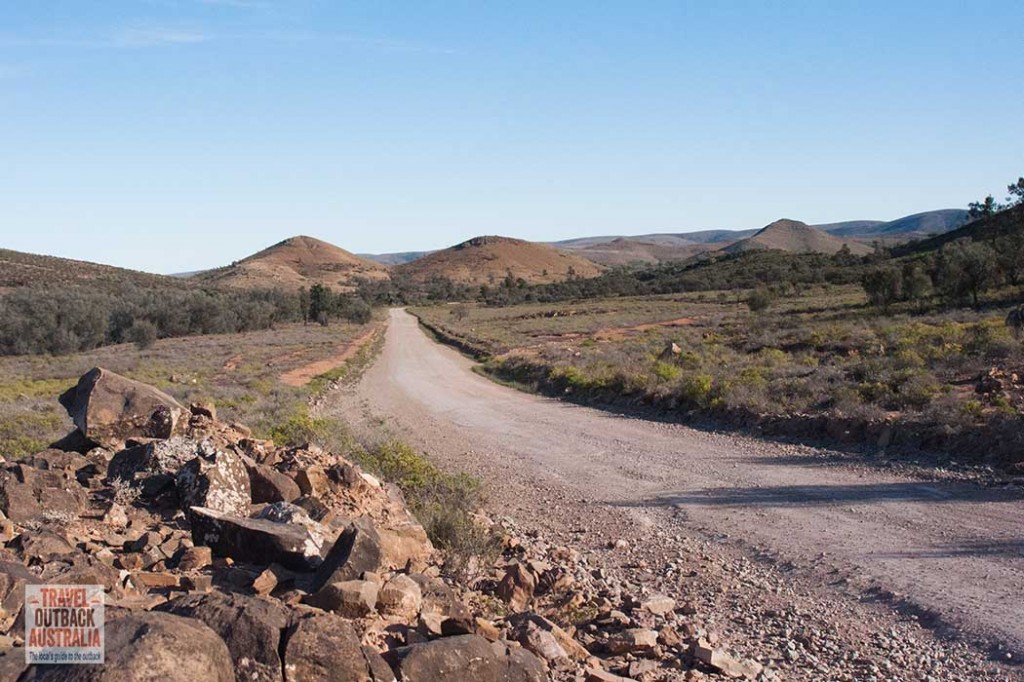 Historic Angorichina and the award winning Aboriginal cultural experience of Iga Warta are not far away, either.

At certain times of the year, you can visit the Ediacara fossils at the Nilpena Heritage Site (approx.40km from Parachilna).

If you’re there over June-July, you’ll be able to see the palaeontologists at work.

Visits to the Nilpena Heritage Site can be arranged at certain months of the year only. Call the Prairie Hotel for details.

Ian Fargher (Ross’s brother) is able to provide a range of spectacular flights over nearby Wilpena Pound, the Flinders and Gammon Ranges, Lake Eyre, Coopers Creek, Innamincka and even Birdsville. Sunrise and sunset flights for Wilpena are also available.

Enquire at the Prairie Hotel for details.

Telstra mobile/3G reception is available inside and close by to the Prairie Hotel. If you walk more than about 50 metres away from the hotel, though, it becomes very patchy.

Fuel (diesel and unleaded) is available 17km to the east from Angorichina Station.

A full IGA supermarket is located north at Leigh Creek, 66km on bitumen road or south at Hawker, 89km.

There is a surprising choice of accomodation options at Parachilna.

The old Parachilna Rural School has been converted into a caravan/campground with a range of options. The school has showers, toilets, laundry and camp kitchen/under cover gas BBQs 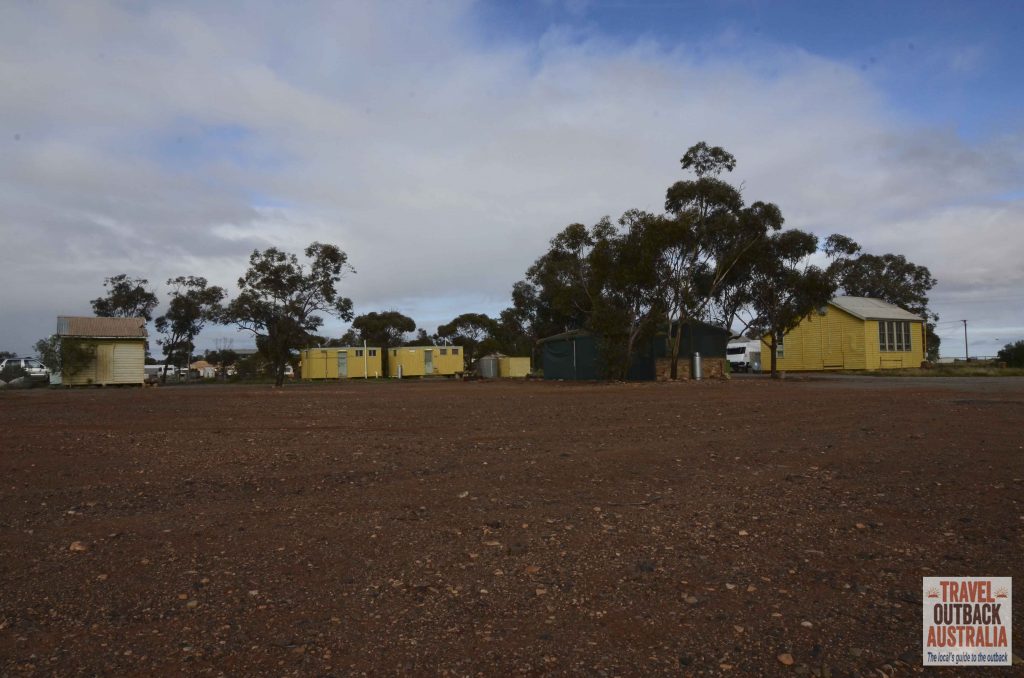 The old Parachilna Rural School is now a campground

The Prairie Hotel has a range of high quality rooms available including the beautifully appointed heritage rooms.

For more a rustic experience, try one of the Fettler’s Cottage’s (with ensuites)

Budget Rooms are available in the ATCOs/dongas (we stayed in these and they were clean and comfortable for two very wet, cold days! 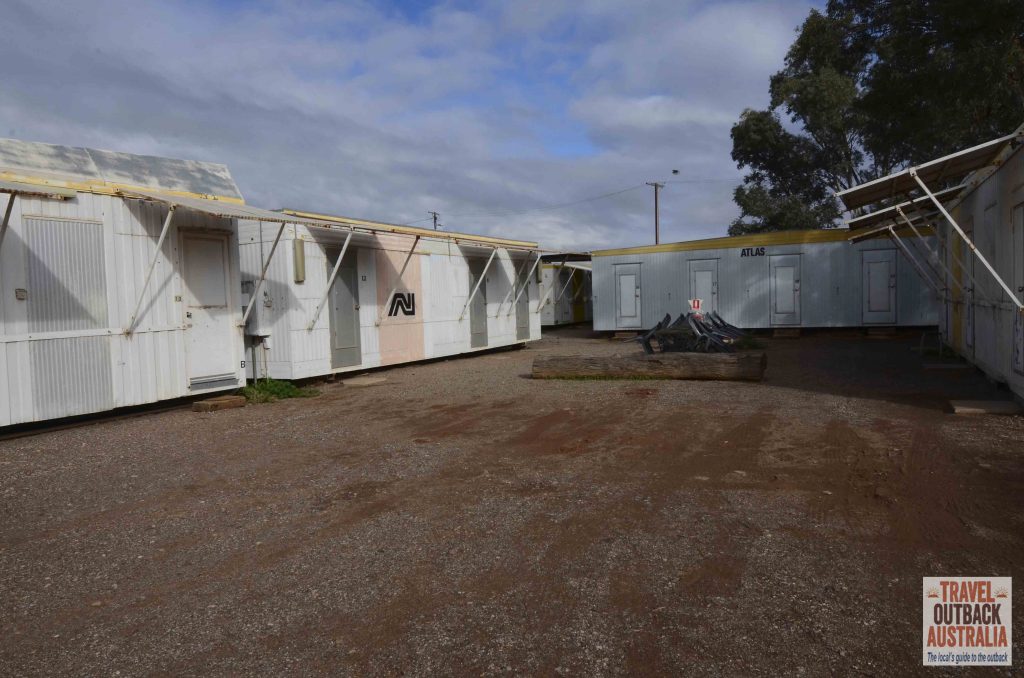 For all accommodation enquires call the Prairie Hotel:

Whilst you can visit all year round, be aware that the Prairie Hotel shuts over January whilst everyone takes a well-deserved break.

To make the most of your visit to the Flinders Ranges, we recommend going between March-November, so you can get out and walk around comfortably.

The busiest time of the year is June-September, when you’ll find plenty of people heading off to the Simpson Desert, Oodnadatta Track or Birdsville.

Parachilna is accessible via a sealed bitumen highway to 2WD, RV, caravans, camper trailers, motorbikes… even bicycles make the trip.

We would like to thank Jane and Ross Fargher for their hospitality, great food and conversation, and help in compiling this page. 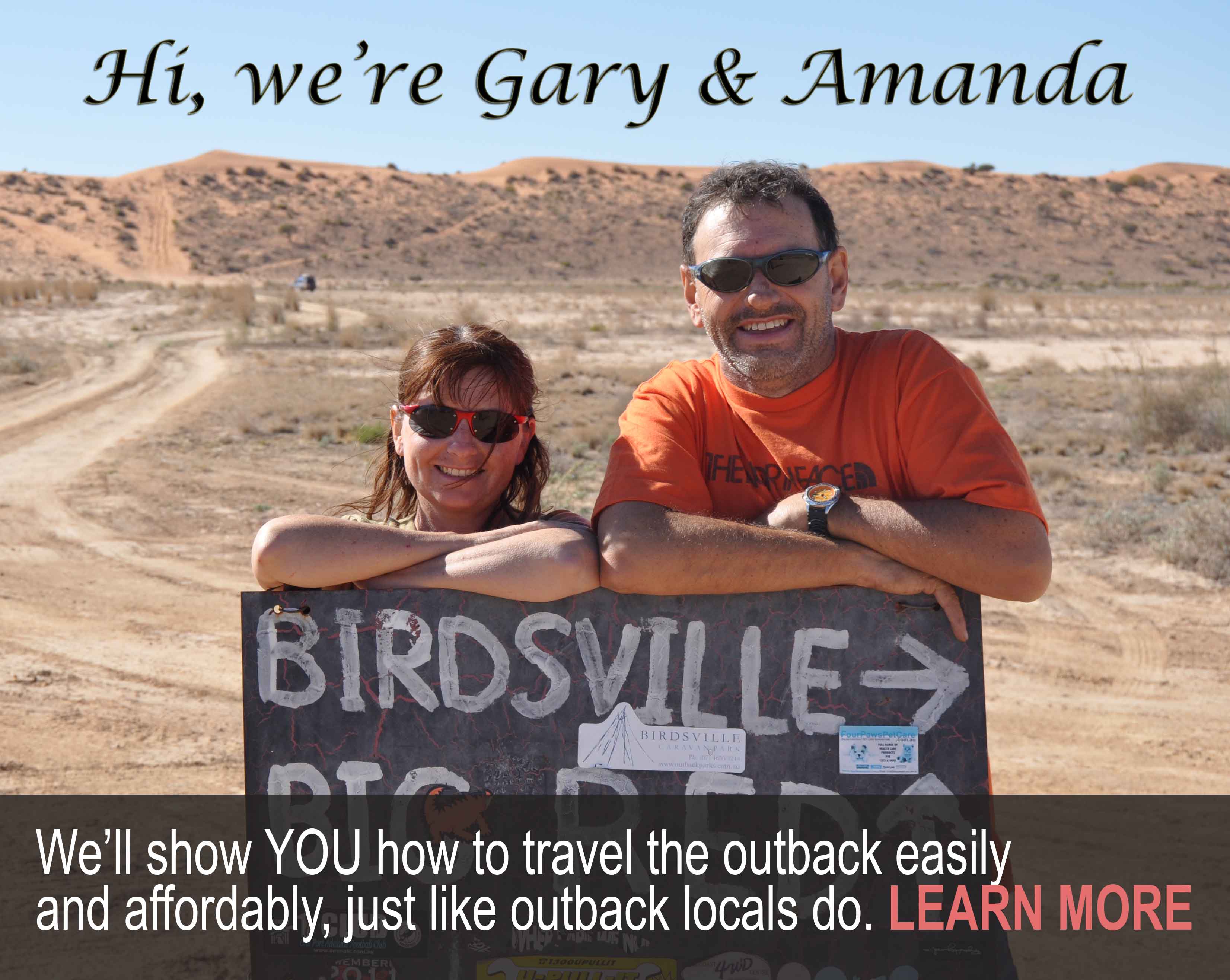 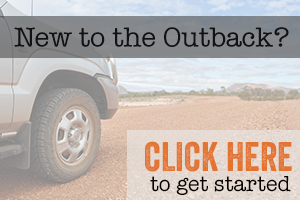